In the past few years there has been a minor revolution in digital photography platforms. Drones can hover and fly over the tops of trees with small cameras attached. The result is often a very interesting perspective of a landscape or group of people. 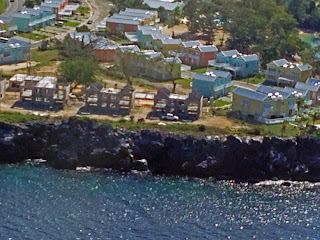 The thing with using a drone is that you need to be considerate of others. Some will welcome a video of themselves at the eclipse while others will say it is distracting and may even ask that you not fly it near them. Total Solar Eclipses are a great group gathering. Getting video before the eclipse will be good. The video after totality will be better!


Drone use at Past Eclipses

The 2016 Total Solar Eclipse did not cover a lot of land areas. The land covered was mostly Indonesia in areas where you could easily loose your drone. Some ideas were tossed about for drone photography from sea only to be discarded due to complexities of take of and recovery from a moving ship. In 2015 a Total Solar Eclipse went over cold arctic regions and drones were just not practical. 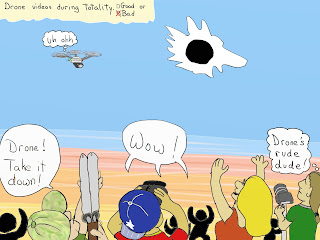 For 2017, the situation is quite different. The eclipse path covers many areas where drones can be flown and people who will fly them. As a result you can expect to see several drone videos of groups watching the eclipse posted to social media after the fact. 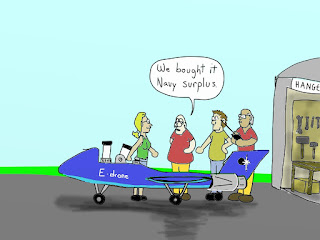 Except for very powerful drones only a light camera can be carried. And getting above clouds might present a real challenge (both in terms of altitude and legalities). The light cameras are almost always wide field showing a curved view at the edges. Dramatic landscape images can be made with these cameras. But it must be stated that they really are not suitable for imaging the eclipse itself. 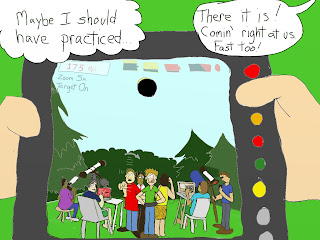 What drones are quite suitable for is imaging the approaching and retreating shadow of the Moon as it crosses the landscape. A fast exposure will be needed as the shadow will be moving very fast. And I do mean fast. It will be moving at a supersonic speed.

It would be of great interest to those of us involved in eclipse predictions and calculations to have those videos along very accurate position and timing details. While we can predict eclipse circumstances with a high degree of accuracy we continue to invent new improvements. Wide angle video showing the shadow movement and shape is desired. 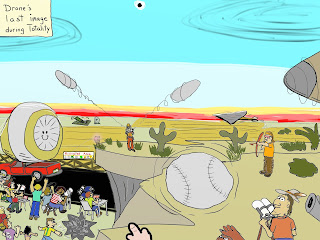 I cannot condone the use of a drone over a populace during totality. There is a very good chance the operator will be distracted by the eclipse itself. Many other observers will find the drone in bad taste during totality. They came to see the eclipse of the Sun by the Moon, not a drone! So avoid crowd images except from the rear.  Flying between the crowd and eclipse is bad. 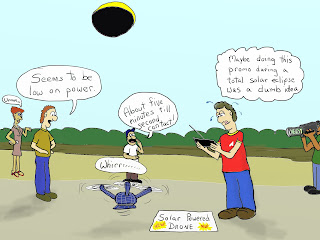